More Vonnegut on the art of writing

I mean, a lot of critics think I’m stupid because my sentences are so simple and my method is so direct: they think these are defects. No. The point is to write as much as you know as quickly as possible.

7 steps toward making headway on that manuscript

Let’s face it. Writing is sometimes a joy. Especially after the fact, when you’ve finished something.   Your three hundred words for the day.  A particularly troublesome paragraph. Or, that holy of holies: a manuscript, newly proofread and, through the magic of the interweb, now sitting in the inbox of some unsuspecting editor. Huzzah.

But starting work on those three hundred words, that paragraph, that manuscript, is tough for all of us. I have an almost cartoonish capacity to dither before launching into writing. All the little OCD’ish behaviors–straightening out my desk, aligning the keyboard and monitors, checking my email, adjusting the chair, checking my email, scratching my…beard, writing blogposts, checking my…OK…you get the picture–that inevitably precede any writing assignment. But once I get to work, I can usually make some progress. Here’s my recipe for getting some serious writing done.  END_OF_DOCUMENT_TOKEN_TO_BE_REPLACED

Alan Rickman is a writing coach in a new play, The Seminar.  He is also the senior actor, with four young actors playing his students. Says the The Seminar‘s author (via the New York Times):

“Somebody said to me once, ‘Talent is a double-edged sword,’ and you really see that with Alan. He holds himself to extremely high standards. Because of that he holds us to those standards as well. It’s a serious business being in a working relationship with him.”

Through flashes of insight into Leonard’s own history and his unorthodox teaching methods, Mr. Rickman invites a deeper understanding of the man and of the complicated process of guiding young writers. Merciless though his approach might be, he’s there to steer the students in the right direction.

A nice little article in Forbes magazine on  improving your writing, part of a continuing series. Business mags are full of useful tips. After all, they work in the real world, they expect results**.

Google Scholar and the literature glut 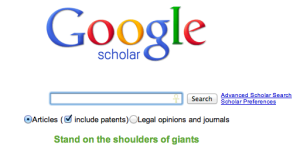 From Clive Thompson of Wired Magazine

We’re often told that young people tend to be the most tech-savvy among us. But just how savvy are they? A group of researchers led by College of Charleston business professor Bing Pan tried to find out. Specifically, Pan wanted to know how skillful young folks are at online search. His team gathered a group of college students and asked them to look up the answers to a handful of questions. Perhaps not surprisingly, the students generally relied on the web pages at the top of Google’s results list.

But Pan pulled a trick: He changed the order of the results for some students. More often than not, those kids went for the bait and also used the (falsely) top-ranked pages. Pan grimly concluded that students aren’t assessing information sources on their own merit—they’re putting too much trust in the machine.

Now I’m a *huge* fan of Google Scholar. When I am writing a paper or grant, Google Scholar, my university library’s page, and my second brain DevonThink  all stand at the ready. This is because I do much of my reading while in the process of writing. Writing exposes the holes in my understanding. So when I go to Google Scholar to find out what’s what, and I get the inevitable list of 3000 entries for, say, “thermal ecology ants”, which ones do I pay attention to?  END_OF_DOCUMENT_TOKEN_TO_BE_REPLACED

This from the folks at Research Trends:

…Research Trends decided to conduct its own case study of scholarly papers published in Cell between 2006 and 2010, and their citations within the same window…

but titles containing a comma or colon were cited more…

and only one (uncited) paper with an exclamation mark in its title.

Also, on the subject of humor…

An analysis of papers published in two psychology journals…found that “articles with highly amusing titles […] received fewer citations”, suggesting that academic authors should leave being funny to comedians.

Note both analyses are for manuscript citations. If the standard protocol when skimming journals (or having webots do it for you) is to look for keywords and phrases, this all makes a bit of sense.

However, if your grant proposal is sitting on a stack with another 19 or so, and you want to be one of the first read (and believe me, you don’t want to be the last read) your gambit may be to attract some attention. And the best way to do that is to stand out. In Advanced EEB this semester, each student proposed five titles for their NSF Pre-Doc, and we “market tested” each set by vote of hands.  Most of the time, it was the short, jargon free, titles that posed a question or a challenge, often with a clever turn of phrase, that won out.

Writing is craft, and you improve your writing through some combination of osmosis–absorbing the talents of your favorite authors–practice, and the toolkit of rules you build as you go. As I work through the writing assignments of our new, very good, cohort of graduate students, I accumulated the following list of simple rules that will push your writing closer to the Big Leagues.  Yes I know, many are oldies but goodies, but they are so easy and easily learned, they are a gateway to quickly improving your writing. And, as David Foster Wallace once pointed out,

This, like many clichés, so lame and unexciting on the surface, actually expresses a great and terrible truth.

So on with the terrible truths. END_OF_DOCUMENT_TOKEN_TO_BE_REPLACED

So what is an hypothesis?  It is a series of assumptions, tied together by logic, that generates novel predictions. Collectively, it is an explanation that answers a scientific question.  Let’s break that down. END_OF_DOCUMENT_TOKEN_TO_BE_REPLACED

Telling a story: from the creator’s of South Park

In this video clip, courtesy of Andrew Sullivan, Matt Stone and Trey Parker of South Park talk about how their writer’s room works. Their two steps are just as valid as you design your talk or outline a grant proposal.

Step 1 is random brainstorming. They use a huge whiteboard to jot down scenes and situations they think would be funny. At this point its all about getting down the ideas. Structure comes later.

When your designing an essay, take a notebook and pen and just scribble down things you think should go in. Don’t censor yourself too much. If it sounds interesting, it probably is. Without compelling bits, you won’t have much.

Step 2 links the ideas together. The classic formula for South Park is three Acts, strung together make a show. How do they recognize which bits go together? It’s definitely *not* Act 1, and then, Act 2, and then Act 3. Act 2 can’t just follow Act 1, it has to be introduced. They way they put it, it’s Act 1 therefore Act 2 but Act 3. That’s when Matt and Trey know they have something interesting.

When you’re presenting a seminar, you don’t want the first thought in their mind “why did they put that slide there?”.  You want, instead, to create a tension. In the seconds before you hit that clicker, create the anticipation of your next slide. Likewise, in the introduction to a paper, the best writers make sure that each paragraph is foreshadowed by the one that came before. For example…

There is increasing evidence that the globe is one really gynnormous turtle. What we think of as mountains are the ridges of the turtles shell. When we see flat plains, we are seeing the smooth plates, arching subtly to the horizon. Valleys are, of course, the sutures between the plates. Our turtle world hypothesis is complete and consistent with known facts as presented by geologists. Astrophysicists, on the other hand, have raised the logical question as to how “Turtle-earth” is suspended in known space.

Here we present the hypothesis, backed up by Hubbell satellite photos, that it is “turtles all the way down”….

Remember its all about…

But if one understands that a sentence is a structure of logical relationships and that the number of relationships involved is finite, one understands too that there is only one error to worry about, the error of being illogical, and only one rule to follow: make sure that every component of your sentences is related to the other components in a way that is clear and unambiguous (unless ambiguity is what you are aiming at).   Stanley Fish, How to Write a Sentence, and How to Read One

One may argue that words are the building blocks of all writing, and that any writing program aimed at helping you produce a two page NSF Pre-Doc proposal in two months might well begin with a discussion of vocabulary. But by now you have most of the words you will ever need to convey even the most complex idea. To write well, the words are all there, you just have to get them in the right order.

In a lovely book celebrating the construction and reading of sentences, Stanley Fish lays out the notion that good sentences are paragons of tight, unassailable logic. Like great music, as Leonard Bernstein once observed, good sentences have a sense of inevitability to them–you cannot imagine  it written any other way.

When you write a good sentence you are literally creating reality in the heads of your reader. Again, in Fish’s words…

In the construction of a sentence you find yourself grappling with two monumental tasks for any creative person: discovering what is it you mean, and crafting words to convey that meaning. We will talk about the former some other day, now a few ways to improve upon the latter.