The residue of design

As a scientist, you know you’ve made it when Boing Boing covers your stuff. I recently collaborated with a team of scientists (Steve Yanoviak, Robert Dudley, and George Poinar) on a manuscript coming out in The American Naturalist. It’s about a nematode whose life cycle has it spending time in the guts of birds and ants, and that has a pretty unique way of doing it. Here’s the, um, straight poop.

Worker ants of the species Cephalotes atratus, like many ants of the treetops, have a hankering for bird poop (lots of nitrogen and salts in a piece of bird poop). Some bird poop, however, is infected with the eggs of our nematode parasite. Now most adult worker ants can’t take solid food; they feed it, instead to their brood back in the nest. However, when infected poop is fed to the brood of Cephalotes atratus ants by their older sisters, the nematodes cause the brood to grow up with bright red (dare we say, berry-like?) gasters. In the paper we build a plausible hypothesis that birds mistake the red gasters (now full of nematode eggs) for fruit, harvest them, pass them as feces, the feces are harvested by Cephalotes workers who bring them back to the nest, and the cycle continues (one key bit of evidence–it’s easy to pluck off an infected gaster and much, much harder to remove the gaster of a healthy ant).

There is no evidence this is a voluntary arrangement–we see no advantage to the ants of harboring these nematodes. Rather, this seems to be another case of a parasite, once inside its host and with its hands on the wiring and machinery, tweaking the host to do its bidding (my endocrinologically inclined pal points out that the nematodes and ants share a host of neurochemicals, so replace “hands” above with “hormones”). The nematodes even make infected ants raise their gasters vertically, making the egg-filled butt-berries infinitely pluckable.

Long before there were neurobiologists, apparently, there were parasites paving the way.

Below the fold, the real story of how this sordid story of manipulation came about.

END_OF_DOCUMENT_TOKEN_TO_BE_REPLACED

How to sell a new-fangled idea 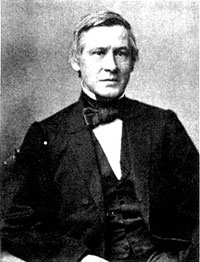 Watch a master teacher first empathize with the struggling skeptic, then cajole him/her with the inevitably of an hypothesis that is merely carrying on the traditions of physics and chemistry.  Brilliant.

“We cling to a long-accepted theory, just as we cling to an old suit of clothes…New notions and new styles worry us, till we get well used to them, which is only by slow degrees…

Such being our habitual state of mind, it may well be believed that the perusal of the new book “On the origin of species by means of natural selection” left an uncomfortable impression…

[But] surely the scientific mind of an age which contemplates the solar system as evolved from a common, revolving mass,–which, through experimental research, has come to regard light, heat, electricity, magnetism, chemical affinity, and mechanical power as varieties or convertible forms of one force, instead of independent species, –which has brought the so-called elementary kinds of matter, such as the metals, into kindrid groups…the mind of such an age cannot be expected to let the old belief about species pass unquestioned.”