Unlike, say, prairies or deserts where the light is often spectacular–think “Dances with Wolves”(….alright, don’t think too hard)–tropical forests are hard to capture with a camera. There is just so much stuff all dimly illuminated (only about 5% of the photons reach the forest floor) , save for the screeching light flecks that penetrate like laserbeams through ephemeral holes in the canopy. This is why the artist working with her pen and ink can often capture what the artist working with her digital camera cannot.

This image comes from Zeladoniac’s fantastic Drawing the Motmot. Keep yer eye out on this blog because apparently she has more like this somewhere. While you wait you can  browse through her eclectic postings on fossils, birds, natural illustration, and hair design.

I was in my pajamas, a child of the space race, watching Jackie Gleason one Saturday evening when a dark card reading “CBS News Bulletin” filled the screen and an announcer ominously intoned of breaking news.

It turns out three heros of mine had died in a horribly, horribly, mundane way. Astronauts Gus Grissom, Ed White, and Roger Chaffee were performing routine tests in the new capsule destined ultimately to take us to the moon. They lay strapped in, doors sealed, capsule fully pressurized with pure di-oxygen. They flipped switches, checked gauges, and generally went through the kind of dress rehearsals that train astronauts to perform their various duties automatically, with no hesitation. 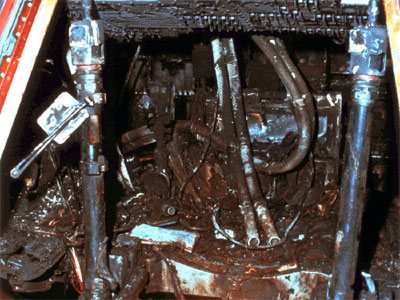 At 6:30 PM EST Chaffee reported “We’ve got a fire in the cockpit.”. It was likely an electrical spark on some abraded wire–this was new technology after all. One would think that in a normal atmosphere of mostly di nitrogen gas the spark would have been noted and the offending circuit fixed. But this was pure oxygen and the flames spread. What’s more, in the pressurized command module it was impossible to quickly open the hatch, which required undoing 12 bolts and pulling the hatch in. The fire, and the increasing pressure (which eventually ruptured the capsule) made this impossible. Seventeen seconds later, Grissom, White, and Chaffee were dead of smoke inhalation. The heat had fused Grissom’s and White’s space suits together.

I suspect there is a large cohort of men and women that are doing science in part due to  these astronauts and the men and women who worked to send them into space and bring them home safely again. To be an astronaut, after all, you had to not only be physically fit and sharp of senses, you had to be smart. You had to get A’s in calculus and physics, we were told. So kids like me that would rather have had teeth extracted than do their math homework did so with the hope of big payoffs sometime down the road.

Even after Apollo 1, most of us longed to don the space suits, strap ourselves into those form-fitting seats, seal the cockpit door, and stare out those tiny windows as the Saturn 5 rocket below us rumbled into life. We imagined weightlessness, the black void, and the brilliant, unwavering light of the stars. And those of us who ultimately chose different paths still occasionally stare upwards on moonless nights and think of the heroes that allowed us to dream.

Dammit, I wanted to be Heinlein

Which science fiction writer are you?

Why you ask for the *best* answer when writing exams

h/t to Rob at robmonroe.net